Canine Encounters of the Most Curious Kind 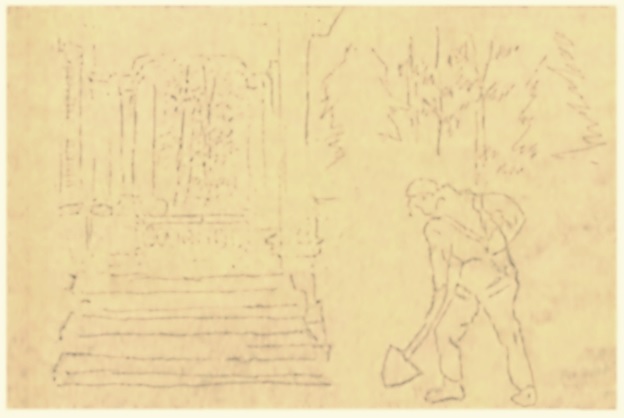 Civil War soldiers encountered dogs in a variety of circumstances on campaign and while encamped. Often, they met during foraging expeditions. Here, then, is some advice for foragers, based on experiences recorded in several regiments’ histories.

When confronted by a watch dog, steal the watch dog first…

The regiment halted again when nearer Baltimore,
and this time the boys foraged in earnest. One man
(“scout”) went to a stately mansion a short distance
from the road to see what he could find lying around
“loose;” but on entering the front yard, he was
confronted by an ugly-looking mastiff chained to the
gate-post. Here was a dilemma, three o clock in the
morning, and very dark. Outside the gate was the
man, inside the dog, and a little further a bake-oven,
wherein were stored sundry sweetmeats. By the oven’s
side stood an apple tree, on which a number of fowls
were roosting. The “scout” decided to steal the dog
first, which he did, and then appropriated whatever
else he could find that he wanted and didn’t want.
He brought to the cars, and distributed, one dog and
chain, one wash-tub, four bread-pans, two one-gallon
jars of preserves, and a few chickens. Other parties
were out, and were quite as successful as the former,
when the whistle blew, and they were soon again
steaming to the Monumental city.

…but never on Sunday.

The ride during the day was without anything of
interest worthy of note, except that in passing through
towns and cities our boys were cheered and signalled by
the people with handkerchiefs and the waving of hands.
Such responses were returned as are customary under
like circumstances, though, if the truth were known,
many in the regiment were less demonstrative than they
would have been on some other day of the week.

And yet, we have to confess that on that day there
was evidence that we were not all as pious or as strict
Sabbath observers as we might have been. For, during
the day, one of our men captured a well-bred spaniel
dog at one of the railway stations and carried him on to
New York. The owner followed on the next train and
entered complaint. After proving property, the dog
was restored and the forager was severely reprimanded by
the colonel for laying in commissary stores on Sunday
and before we were out of Puritan New England.

~From “History of the Sixteenth Regiment, New Hampshire Volunteers,” by L.T. Townsend, 1897.

If you cannot steal him, provide an irresistible distraction.

The company K boys also made great preparations for
celebrating the coming day ; they proposed a thanksgiving
breakfast. In the evening sixteen of them, of whom Bill
Tabor seems to have been the leader, removed some boards
from the high fence at the back of the park near the
railroad, through which they made their exit, and visited
a Dutch farm house, where there was a large flock of fowl.
There was, however, a watch dog tied up there to give the
alarm. But one returned, and brought to this wary sentinel
a female companion from camp, which engaged his attention
while they cut the rope, and both went frolicking off
together, leaving the coast clear. Then work began, and was
quickly despatched; they estimate that they carried to camp
about one hundred and twenty-five hens, ducks, and geese. On
returning to camp they dug a hole in one of their tents, and
sat round it and dressed the lot ; then the hole was filled
and the straw replaced. At half past four in the morning of
Thanksgiving Day their breakfast was read. Late in the
afternoon the Dutchman appeared in camp with an officer
and a search warrant, but could find no trace of the
missing birds. It is said that, in their disappointment,
they complained to Colonel Kingman, but the colonel could
not believe there was a man in his regiment who would molest
the Dutchman’s property, although it was thought that he
himself, but perhaps unknowingly, shared in the feast at
his breakfast table.

And never assume you’re the first to have found a buried treasure.

On the 18th we passed through Covington, a pretty village,
and crossed Yellow river; halted at noon for lunch and disintegrated
our usual two miles of railroad track.

Resuming the march we halted to rest by the roadside
about 3 o’clock, near a spring, where several of our brigades
had refreshed themselves in advance of us. Close by was a
comfortable farmhouse with several ladies in the wide veranda
who watched the pranks of the soldiers with much apparent
interest. Presently one of the men in our leading company noticed
that the sods and earth upon which he was lying had apparently
been recently disturbed. Drawing his ramrod he probed the soft
spot with the air of an expert and called for a spade. A few
minutes of lively work disclosed a pine box while his comrades
crowded around him speculating as to what valuables it might
contain. The ladies, too, seemed to be excited and anxious
about it — perhaps their money or their silver spoons were in
peril. The box being carefully uncovered the top was pried off and
there exposed to view were the remains of a spaniel dog, rebuking
his disturbers with an odoriferous protest that reached their
consciences by the most direct route. The lid was replaced, the
pit refilled and the earth and sods carefully replaced and dressed
over ready for the next brigade. Now the lady of the house
graciously remarked that poor Fido was not resting in peace
very much that day; this was the fourth time he had been
resurrected since morning.

~From “The story of a regiment; being a narrative of the service of the Second regiment, Minnesota veteran volunteer infantry, in the civil war of 1861-1865,” by J.W. Bishop, 1890

Our unique souvenirs and gifts honor the faithful dogs of the American Civil War to support animal rescue. Our donation total to date: $3,672. (updated 6/2/21) We also offer Vintage Dog gifts and souvenirs from decades--or centuries--past! Their sales, like sales of our Civil War dog items, also support animals in shelters and rescues. Learn more at http://www.LoyaltyOfDogs.com.
View all posts by LoyaltyOfDogs →
This entry was posted in 15th New Hampshire, 16th New Hampshire, 2nd Minnesota, 51st Pennsylvania, Uncategorized. Bookmark the permalink.

This site uses Akismet to reduce spam. Learn how your comment data is processed.